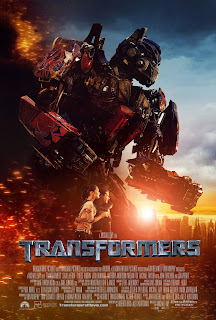 Those of you of a certain age will fondly remember wiling away the school holidays watching Timmy Mallett physically abuse minors on the garish Wacaday.

The piece-de-la-resistance was the Transformers cartoon at the end of the programme that introduced a generation of kids to some overpriced but rather ingenious toys.

Keen to cash in…*ahem*...educate a new generation the franchise was “rebooted” in 2007 with a big-budget movie tie-in helmed by director Michael Bay in what turned out to be another fetid gust in his vaults of stink.

The “story” as such involves the Autobots fighting the Decepticons on Earth over the Allspark, some sort of all powerful Rubix cube that could bring their home planet back to life or be used to conquer the universe. Such are the wild leaps of logic, pedestrian dialogue and retina burning action the story is purely incidental as your I.Q. would have left the building within the first 30 minutes.

Shia LaBeouf (Sam Witwicky) plays an innocent dweeb who inadvertently gets caught up in robo-mess.  He struggles valiantly to wangle a few laughs from the morass whilst wooing the delectable Megan Fox (Mikaela Banes) but is quickly engulfed by the all-consuming tide of dreck. You can only imagine that Jon Voight (Defence Secretary Keller) and John Turturro (Agent Simmons) have large alimony payments to fund.  They really should be in better films than this. 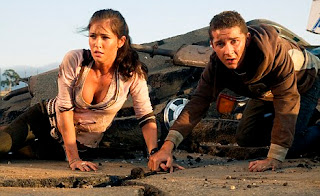 Despite being a stinking turd of a movie I was clinging to the hope that a few helicopter explosions could justify the wasted two and half hours of my life. I was sadly mistaken.  Despite over half a dozen helicopter sightings, including a sexy looking Decepticon attack helicopter named “Blackout”, only one gets engulfed in flames.

Leader of the Decepticons, Megatron climbs an LA building in order to retrieve the Allspark from Labeouf. An army chopper hovers at roof level and just as he is about to hand the cube over to the authorities, Megatron launches a couple of heat seeking missiles that slam into the copter and send it spinning out of control. It plummets out of shot engulfed in flames.

To give Bay credit, Transformers will surely appeal to its target demographic: pubescent boys. In fact Bay has done a remarkable job at visualising the mind of your average 12yr old; a hyperactive, incoherent mess of toys, cars and confusing sexual urges.

Bay had plenty of opportunities to give us a proper chopper fireball yet he drops the ball. There is absolutely no excuse for a downed helicopter not to be shown in its fully exploded glory. Perhaps Bay was combing his fabulous hair. Very, very poor.

Robot shoots down helicopter with missile. Sure it has been done before. Bay hasn’t even got the imagination to do that right.

Doubtful, but as we don’t get the pleasure of seeing the copter slam into the floor we will never know for sure.

The exploding helicopter occurs during the final part of the movie alerting you to the fact that the film is nearly over and you can go and do something more worthwhile with your life such as alphabetising your spice rack.

To quote our friend Robert Davi in Die Hard, Michael Bay usually likes “helicopters up the ass”. Such is his penchant for moody shots of choppers riding into and out of the sunset you would bet your house on a top notch explosion.

What we get is an inexcusable abomination.  Also how does a helicopter survive a multiple missile impact without blowing up immediately?

Jazz: "What's crackin' little bitches? This looks like a cool place to kick it!"
Sam Witwicky: "How did he learn to talk like that?"
Optimus Prime: "We've learned Earth's languages through the world-wide web."

In the cartoon Megatron used to transform into a Walther P38 pistol that his henchman would be able to pick up and shoot but in the film he inexplicably turns into a plane. More liberties taken but at least they get to sell a bit more merchandise right?

Review by: Neon Messiah
Posted by Exploding Helicopter at 15:49