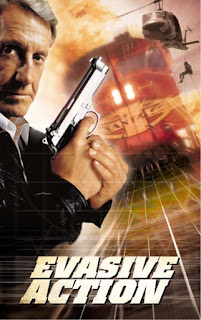 My buddy over at Saturday Night Screening has done sterling work cataloguing the world of Die Hard-ish. That is, films which take the plot template of Die Hard but then transpose it to a different location.

Evasive Action (1998) isn’t part of that illustrious canon, though – instead it falls into the little known sub-genre of Con Air-ish. And, as the film’s alternative title Steel Train makes clear, this is basically Con Air-on-a-Train.

So, when a group of prisoners are locked into a train car to be transferred to another jail we can be pretty certain they’re not going to be peaceably arriving at their destination a few hours later.

Among the inmates onboard is a mob boss (Roy Scheider) who, shock, horror, is planning to use the trip as a chance to bust out of jail. Also along for the ride is our hero (Dorian Harewood) who – a la Nicholas Cage in the original – just wants to quietly serve out his sentence quietly.

With dizzying predictability, Scheider’s goons soon overpower the guards and spring the prisoners. Only they hadn’t reckoned on Harewood who, having thrown his lot in with a stewardess and young girl he’s befriended on the train, decides to foil Scheider’s plans.

Now, you may be wondering if it’s really sensible to transport dangerous prisoners around on a train. That’s explained in a sly reference to Con Air, when one character says they’re no longer flown: “Not since that plane load of prisoners went down in Vegas.” Cheeky.

The rest of the film isn’t so subtle. Steve Buscemi’s memorable psychopathic killer in Con Air is reprised here, sadly with the instantly forgettable Clint Howard – whose weary gimmick is to speak only in movie quotes.

This works fine when Howard uses a line from Jaws to comment on the latest hitch in Scheider’s plans: “You’re going to need a bigger boat.” But using such a one-trick device soon runs into problems, most bizarrely when he corners the young girl. He’s all set to start monstering the helpless waif, but then is dissuaded when she starts quoting lines from Taxi Driver back at him. Excuse me, Taxi Driver? Did she watch that one with mummy? Hmmm.

Anyway, having chewed up and spat out everything worth using from Con Air, Evasive Action goes on to regurgitate all your favourite, train based thriller clichés. Cue plenty of running about on top of rail cars, uncoupling of carriages, and last minute point changes.

This light-fingered approach to other locomotive films turns into outright larceny with the ending, which simply re-uses footage of the train crash climax in Silver Streak. It has to be seen to be believed. Or rather, see the original and then see this. Whatever: you get the point. 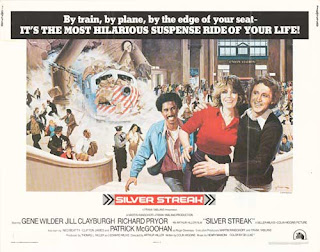 Still, this website is not dedicated to the world of exploding trains – that’s a project for another time – so let’s get to our primary interest in the film.

Scheider’s escape plans involved being picked up by helicopter. However, the police move in to stop the prisoners escaping and during the gunfight the helicopter is damaged by rifle fire.

Trailing smoke, the wounded chopper limps off, disappearing behind a nearby ridge. We hear a crash and a plume of flames leaps into the sky. The chopper, we have to conclude, is no more.

The first rule of exploding helicopters is that you should be able to see the actual helicopter explode. For this offence alone, director Jerry P Jacobs should crawl behind that self-same ridge and immolate himself.

But, hey, this is a film which rips off the ending of Silver Streak. And by the time I reached the end, I’d gone past outrage and started to just admire the chutzpah of the man.

It was enjoyable to see Roy Scheider as a villain, a role I can’t remember seeing him play before. There’s a great scene early in the film where Scheider establishes his bad-ass credentials by brutally clubbing an uncredited Sam Jones (Flash Gordon) to death. Scheider was 66 when he made this, and he looks nails.

It’s easy to assume that being the henchman for a mob boss is a young man’s game. But here’s a surprisingly sprightly Foronjy running along the top of a train, taking care of business, at 61. Sadly, Foronjy suddenly reaches the end of the line on this trip when Harewood punches his ticket. All change!

At one point, our hero Harewood is ejected and has to get back on board the train. Having stolen a motorcycle, he races alongside a doorway on the train.

Just as you’re wondering how on earth he’s going to get back inside the train – and drool at the Olympian levels of stuntmanship you’re about to witness – the camera suddenly cuts to Harewood flopping down inside the doorway of the train. Problem solved.

It’s worthwhile spending a moment to consider the film’s title as nobody really takes Evasive Action at any point in the film. It’d be too cruel to suggest that it’s what potential viewers should do as it really isn’t that bad. But if they weren’t happy with the blue collar drama- sounding Steel Train, why change it to this?

Review by: Jafo
Posted by Exploding Helicopter at 20:29