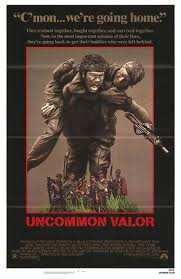 Losing a war to a third world country: that’s got to hurt.

But that’s what happened. So, while heavyweight film offerings like The Deer Hunter and Apocalypse Now sought to make sense of the Vietnam War, they didn’t change the result. It was still Charlie 1 - Uncle Sam 0.

How then, did the most advanced nation on earth come to terms with being defeated by a third world nation? By going and getting our boys back - that’s how.

The glut of 80s ‘nam POW movies seemed borne of a desire to fight the Vietnam War again, only this time the good guys were going to win. That’s the Americans in case you were still confused or some kind of pinko, liberal, peacenik.

In Uncommon Valor, Gene Hackman plays retired Colonel Cal Rhodes who, having grown impatient with Government efforts to return POWs, sets out to find and rescue his son - who he believes is being held captive in Vietnam.

It’s curious that these missions were nearly always DIY jobs - see Missing In Action or Cobra Mission. And without anyone to contradict my pop-psychology, I'm going to say that's about American can-do attitudes, and a distrust of big Government. Conveniently, it also allows unholy hell to be unleashed on the gooks entirely free from the constraints of military law. 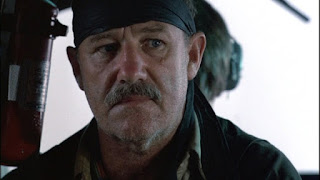 Anyway, Hackman recruits a group of his son’s old war buddies - played by Fred Ward, Reb Brown, Harold Sylvester, Tim Thomerson and Randall Cobb. Also tagging along for the ride is Patrick Swayze, who was orphaned by the conflict.

During an extended training sequence, our heroes spend hours rehearsing their mission on a perfect replica of the prison camp. In fact, they spend so long training, and so successfully, it becomes abundantly clear that this mission will go tits up at the earliest opportunity.

Sure enough, once they arrive in Asia, our hardy band of brothers have their weapons confiscated by the local police after being tipped off by the spineless US authorities.

Not to be dissuaded, our heroes scrounge together a motley selection of weapons and continue their mission - fighting their way into Vietnam with an ease which makes you wonder how on earth they ever lost the war first time around. 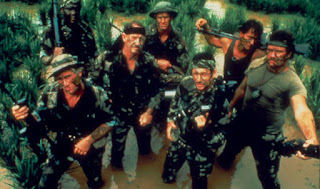 After the requisite number of huts are blown-up, the prisoners are rescued and reunited with their families but, in a sombre final note, there is no happy ending for Hackman’s grizzled veteran.

But frankly, this is all a side issue. The only casualties of war we are interested in are possessed of curvy glass windows and rotor blades. And you don’t have long to wait for helicopter mayhem in Uncommon Valor.

The film opens with a flashback to the war. A group of soldiers races frantically across a paddy field under heavy fire to helicopters waiting to evacuate them. One of the choppers is hit by a mortar round and explodes in a massive, slow motion fireball.

Later, there’s a second, equally impressive, chopper fireball during the dramatic rescue of the POWs, when Tim Thomerson’s helicopter is hit by gunfire, causing it to explode and crash into the river.

The chopper fireball in the opening sequence is marvellous. The footage looks like it has been slowed down a fraction allowing us to fully enjoy the way the explosion consumes the fuselage. A further ripple of explosions destroy the tail and rear of the helicopter.

Tim Thomerson’s helicopter crash is commendably free of special effects. It looks like they simply dropped a helicopter having first set it on fire. Apart from the tell-tale stationary rotor blades it’s satisfyingly realistic.

At two minutes and four seconds, Uncommon Valor currently holds the record for the earliest helicopter explosion in any film we’ve reviewed.

Tim Thomerson miraculously survives his seemingly fatal helicopter explosion and crash. As we see him doggy-paddle away from the wreckage, we are left to speculate that the river must have cushioned his low altitude crash and extinguished the flames. Or that he was nowhere near the thing when it crashed. 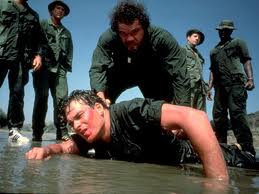 The opening scene of the film is vintage ‘namsploitation stuff. As the soldiers race across the paddy field to the waiting choppers multiple people die in classic, Willem Dafoe swan-dive poses. There’s also copious use of slow-motion as mortars blow plumes of mud upwards into the sky.

On one hand, Uncommon Valor is an exciting tale of derring-do. On the other, it tries to show the human cost of the war. The team Hackman recruits to rescue his son are all damaged to greater or lesser extent by their experience of the conflict.

But whenever the film veers into touchy-feely territory, scenes tend to be ended quickly or aborted with someone making a wisecrack. It’s as if the director Ted Kotcheff keeps getting suddenly nervous about what sort of film he’s supposed to be making.

“Most human problems can be solved by an appropriate charge of high explosives.”

Review by: Jafo
Posted by Exploding Helicopter at 06:52