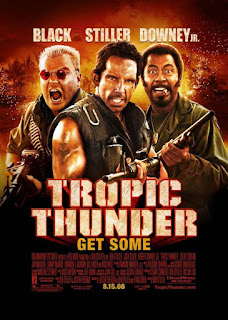 Written and directed by Ben Stiller, Tropic Thunder tells the hilarious story of the worst fake Hollywood war movie ever.

Three pampered actors - fading action hero Tugg Speedman, gross out comedy star Jeff Portnoy and method actor Kirk Lazarus (Ben Stiller, Jack Black, Robert Downey Jr) - head out to Vietnam to film what they think will be the greatest ever war movie, with precious little idea of how real it can actually get.

The trio land in Vietnam with highly strung British theatre director Damien Cockburn (Steve Coogan) who is totally out of his depth, with no idea how to control his diva-like demanding actors. As ever with Vietnam war films, there is always the grizzled Veteran on hand to lend that extra air of realism, in this case Four Leaf Tayback, played by Nick Nolte, complete with prosthetic hands.

There are quite a few decent cameo roles; Danny McBride is Cody, the film crew’s FX master, Bill Hader of Saturday Night Live fame makes an appearance, but the biggest hoot of all has to be Tom Cruise, in a wig and what appears to be a fat suit and lots of hair as the film’s shouty producer, Len Grossman. 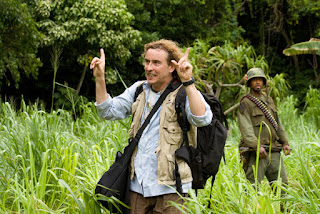 This is a rollercoaster ride from start to finish, a hilarious action comedy that packs as many laughs as it does explosions. The movie offers up plenty for fans of war movies and comedy alike; it goes without saying that classic war and Vietnam films such as Rambo, Platoon and Apocalypse Now are lovingly ripped off, with hefty doses of jungle and combat imagery to boot.

And it’s during the film’s opening ‘namsploitation pastiche, that we get to see the genre’s ubiquitous exploding helicopter.

As a number of choppers circle a paddy field to rescue the American soldiers, the tail rotor of one of the whirlybirds is hit by gunfire - sending it spinning out of control and crashing into the ground. 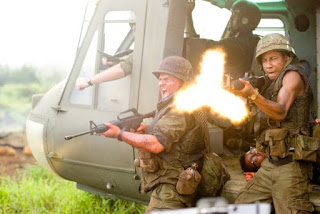 It’s always good to start a film with some impressive pyrotechnics, and Tropic Thunder doesn’t spare the diesel barrels or propane tanks with this effort.

There’s a suitably big fireball, and plenty of flying wreckage. I’m not sure that the violent spin which the chopper goes into is aerodynamically realistic, but hey, it looked cool and that’s what really matters.

It’s probably too much to expect innovation in a film which is operating as a parody. It’s main purpose is to provide humorous facsimile of other films, not to push the boundaries of helicopter explosion. 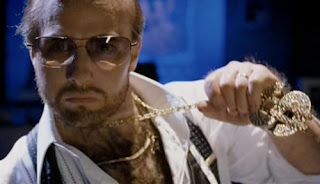 Tropic Thunder has a lot of guts, taking the mick out of weird and wonderful Hollywood habits but the real winner was getting Tom Cruise to appear a bald wig as the film’s ruthless producer, Les Grossman.

Also, the fake trailers from each of the actors are priceless. Plenty of laughs, high octane action throughout, laced with a bit of satire for good measure. The real bonus is the dancing Tom Cruise at the end!

A lot of swearing, and some of the jokes about Speedman’s (Ben Stiller) movie “Simple Jack” are a bit near the bone, but other than that, not many.

There are so many! Tropic Thunder really is a goldmine of quotable lines. One of the best comes from Kirk Lazarus, “I don’t break character ‘til I’ve done the DVD commentary!”

The film’s title is a play on “Tropic Lightning”, the name of a real-life war platoon who saw service during World War 2, as well as, amongst other conflicts, in Korea, Vietnam and Iraq, who in turn inspired many other war films.