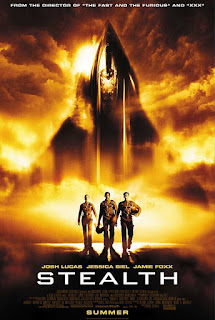 The US military creates an elite squad of air force pilots to carry out top secret, ‘black ops’ missions. Rounding out the team is a revolutionary new fighter jet piloted by an artificial intelligence system.

Clearly, the world is about to enter a new era of warfare – one waged by obedient computers that aren’t prone to the vagaries of human emotion and error. What could possibly go wrong?

Sure enough, a bolt of lightning is all it takes to turn the supine super-jet into a heavily armed, homicidal killing machine. Our team of air force jocks, played by Jamie Foxx, Jessica Biel and Josh Lucas, then have to stop the plane before it starts World War 3.

Now, it’d be easy to put the blame for this fiasco on the shady boss of the project – played with usual reptilian loucheness by Sam Shepard – who’s presumably slumming it in this drivel to fund another stage play. But I prefer to park the responsibility with Lucas, Foxx, and Biel.

That’s because the project involves the super-jet’s AI system actually learning from these ace fighter pilots. Unfortunately, their frequent demonstrations of insubordinate, gung-ho, bravado provide the rotten seed that takes root in the computer’s mind.

Sadly, Stealth doesn’t choose to explore this potentially interesting plot strand. I guess that’s because this is basically a kid’s film and such complexity isn’t welcome in Hollywood, even in fare aimed at older audiences.

Instead, our trio have to fight it out with the super-jet. Unluckily for Jamie Foxx, Biel and Lucas have some unresolved sexual tension between them, so it’s the Oscar winning actor who has to take the cinematic equivalent of an early bath – smashing into the side of a mountain. Perhaps he should have called his agent. 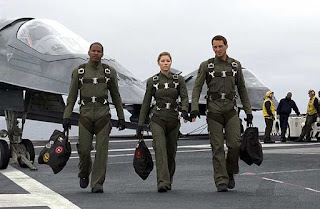 Anyway, Biel’s jet is damaged by flying debris from that crash and she’s forced to eject in North Korea, which sets up the finale of the movie.

By this point, Lucas has reasoned with the super-jet AI system and talked it out of starting WWIII. Now aboard the futuristic fighter, he heads off to rescue Biel – in flagrant disregard of his orders. I know, what were the odds?

With most of the North Korean military laid to waste, Biel and Lucas look like they’re going to reach safety. But then an enemy helicopter turns up and is about to blast our heroes until the super-jet – inspired by Lucas’ love for his comrade, no less – rams into the chopper, blowing both aircraft up.

Hang on, wasn’t the AI system supposed to make this kind of dunderheaded thinking redundant? Oh well, the loss a unique multi-billion computer system is a small price to pay for Lucas and Biel to be able to walk off into the sunset holding hands. I‘m sure the Pentagon will be thrilled.

Whatever nonsense we have to endure to get to this point, the explosion is an absolute belter.

A truly huge pyrotechnic fireball ensues and the sky appears to actually rain fiery debris. No expense or explosives seem to have been spared. Top notch.

We’ve seen helicopters rammed with plenty of vehicles before - tanks, buses, cars and even other helicopters. But this is the first one I’ve seen where a helicopter has been rammed by a plane. 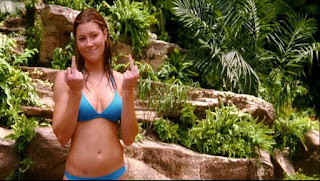 One has to salute the socially progressive US military depicted in this film. Not only does a woman (Jessica Biel) get to be a crack pilot serving on the front line, but she’s also allowed to wear babe-alicious figure hugging crop tops, and in one utterly redundant scene a bikini. Where can I sign up?

Amongst the plethora of bad habit’s the super-jet’s AI system picks up from Lucas and his pals, is a predilection for god-awful stadium rock – in this case US tub-thumpers, Incubus.

In fact, the US dirge rockers were specially commissioned to write songs for the movie and there isn’t a testosterone-pumped moment that isn’t soundtracked by them. Urgh.

Not really a quote, but the proper name for the super-jet’s AI system is EDI, or Extreme Deep Invader, which sounds more like a brand of condoms than the future of modern warfare.

One of the set-piece explosions utilised 500 gallons of petrol. Such is the magnitude, it was potentially visible in space and NASA had to be informed.

Review by: Jafo
Posted by Exploding Helicopter at 17:51