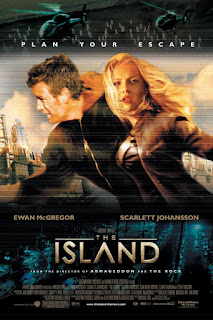 This film is brought to you by Puma, Calvin Klein, Nokia, Tag Heuer, Ben & Jerry’s, Xbox, and the V12 car. After years of famously ‘f*cking the frame’, this was the movie where Michael Bay finally got round to screwing the audience.

Really: it’s just one big advert. I remember years ago, Back to the Future 3 got loads of stick for all those Pepsi and Nike signs swooshing across the screen. More recently, Will Smith in I, Robot couldn’t get through three scenes without telling someone how cool his vintage Converse trainers where.

(You see, it was all about his ‘character’ being quirky for buying the footwear, and not at all about the ‘money’ Converse paid for the product placement.) Still, such tomfoolery is old school compared with The Island (2005).

Scene after scene is hand-crafted to show off the film’s sponsors. Here’s Steve Buscemi holding his Michelob beer unnaturally high. There’s Ewan MacGregor in a phone booth, half-obscured by a big MSN logo.

Hilariously, one scene simply opens on the hood of a Mack truck, stays there for a milli-second, then swings sideways to get on with the action. By the time a real, actual perfume advert starring Scarlet Johnannsen – which was all over the telly at the time – is judderingly ‘weaved’ into the storyline and shown in full glory on widescreen, you’re pretty much in through-the-looking-glass territory.

Still, among all the ads, they do gamely manage to squeeze in a plot. Thousands of people live in an underground complex-cum-prison, believing they’re the sole survivors from a global disease – but actually they’re just clones of rich people, kept alive in case the originals ever need a new body part. Surprisingly, given these people are essentially talking livestock with no concept of money or commerce, they’re clad from head to foot in designer Puma gear.

Soon Ewan and Scarlett escape to a very-much futuristic New York, where their survival strategy seems to revolve around looking worried in front of lots of advertising billboards featuring very-much contemporary brands.

Ewan McGregor, a past-master of poor career decisions, looks palpably distressed to be on screen among this nonsense. Look closely and you can almost see it in his eyes: ‘Christ, first Phantom Menace and now this..?’

It doesn’t help that he also has to play the ‘human’ version of himself as a rich, cocky Scottish git who’s into motorbikes. (Oh, the post-modern irony!) Hilariously, ‘real’ Ewan wears glasses – obviously, so the audience can tell them apart more easily. But hang on: he’s paid $5 million for a clone with twenty/twenty vision and he’s walking round in glasses?

Following stints in Troy and Silent Hill, Sean Bean once again proves that no imaginative world – no matter how mythical or dystopian – need necessarily preclude a thick Sheffield accent. It’s grim up t’future.

Set against all this bunkum, a mere helicopter explosion inevitably pales. In fact, had Bay formed a hundred real, full-sized helicopters in a giant aerial circle, then sent them all accelerating to the dead centre at top speed, the resulting fireball-to-end-all-fireballs could not be more spectacular than the shamefacedness with which he forces his brands down the gullet of the viewer. You feel like human foie gras by the end.

I’m sorry, did you say ‘artistic merit’? Very perfunctory. The chopper pilot swings slowly round the side of a skyscraper just as a giant metal sign comes away from it, and says something like: ‘Oh-no-the-sign-is-coming-off-the-building-and-looks-like-it’s-going-to-hit-us’ instead of just moving out the way.

After the crash happens – the giant sign, our heroes and the exploding ‘copter all go hurtling to earth together – Bay starts humping the frame so vigorously that it’s anyone’s guess what’s going on. I rewound six times and all I could ascertain was that a crap CGI ball of chopper-shaped flame seemed to be falling.

Ewan and Scarlett do, natch. For some reason, there’s a giant trapeze net attached to the building about 20 feet up that our plucky couple land in and which the chopper somehow misses by a mile. Don’t question why: just be thankful the net wasn’t branded by Cola or something.

Weirdly, the product placement. After a while, you give up on any pretence that you’re actually watching a film and just start playing ‘spot the ads’. Much more fun.

Djimon Hounsou’s ex-special forces hit squad prove repeatedly unable to hit a barn door at ten paces. Really, this elite team could spend all day at a fairground shoot-the-ducks gallery and not win a single goldfish.

Just before the chopper explosion, our heroes are stuck fast between the inside of a giant sign and a skyscraper. Stood forty feet above them, two mercs unleash such a barrage of relentless artillery from their machine guns that the iron-secured sign actually comes off the building. And yet they miss the two gawping moppets directly below them. Just rubbish.

Steve Buscemi: “Just cos people want to eat the burger, doesn’t mean they want to meet the cow.”

My mate was a storyboard artist on a Michael Bay film and said he was every bit as pleasant as you'd expect him to be.

Review by: Chopper
Posted by Exploding Helicopter at 17:41