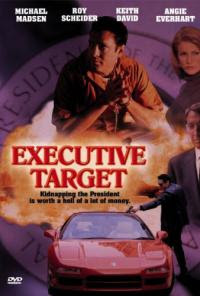 Executive Target is a car crash. Both literally, and figuratively.

Nick James (Michael Madsen) is a disgraced stunt car driver, busted out of jail by a gang of super-criminals who want to kidnap the US President (Roy Scheider).

They want James to drive the getaway car because: “No-one else can do what he can behind a wheel.” That’s right: nobody.

That’s because Executive Target is basically one big car chase. In fact, it would like you to believe it’s the ‘greatest crash movie ever made’, featuring ‘the best car chase since Bullitt’. Bold claims, but not entirely without foundation.

The three, lengthy set-pieces are indeed well staged. Unquestionably, there’s more fast-paced, tyre-screeching, car-flipping, vehicle-exploding action than you could ever hope to witness. 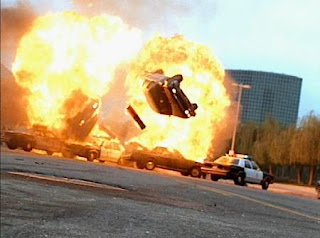 Be in no doubt: watching these scenes, Jeremy Clarkson would be sat splay-legged before his hi-def widescreen and reaching for the Kleenex. (Can I just apologise to all readers here for the irrevocable mental image I may have just conjured there.)

Oh, there’s mayhem a go-go. There’s even a sequence where they pointlessly drive through a market, just so a warehouse full of boxes can be skittled aside. Honestly, it’s all here.

But, before we get excited and pull the throttle right out (again, apologies for that Clarkson allusion), let’s pull into a literary lay-by and talk about Michael Madsen for a moment.

The Madsen’s acting style embodies a lazy casualness that reminds me of Robert Mitchum. It’s in full evidence here as, despite finding himself enmeshed in a huge criminal conspiracy (and with his wife in fatal jeopardy), he displays nothing more demonstrative than a somnambulistic sang-froid. 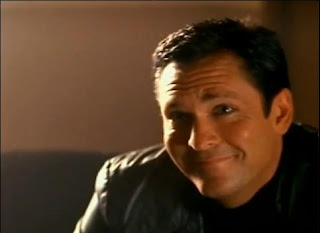 But despite this laid back style, Madsen does have a great ability to give off a suggestion that he might suddenly do something – even if he then does nothing. And indeed, nothing is what he mostly does in this movie.

There is one really great Madsen moment, however, when he throws a cigarette away just before sharply accelerating his car away from some pursuers. The gesture’s got an effortless cool that you can’t fake.

Anyway, James duly kidnaps the President, but before handing him over to the super-criminals, enlists him to help rescue his wife. The film ends with a good old fashioned shoot-out as James storms the criminal’s underground bunker, backed up by the President’s security team – who show considerably more prowess than they did earlier when ‘protecting’ the President.

Now, I might have made the kidnap of the President sound a touch easy. But, while POTUS’ close protection team prove utterly hapless during the kidnap scene, the President does have a couple of helicopters providing air cover, and they’re much more successful in inflicting casualties on the criminals.

Until, that is, the criminals unveil a heavy machine gun mounted to the back of a pick-up truck. Of course, our two chopper pilots obligingly pooter directly into the gunner’s line of fire and find themselves duly incinerated.

It’s good to see that, even in a film dedicated to automotive action, director Joseph Merhi includes a couple of aviation explosions amid the car-maggedon. However, perhaps unsurprisingly, it does look as if more effort went into the car smashes than the chopper crashes.

The editor pulls the old trick of suddenly cutting to an image of a full screen explosion which obscures the helicopters – thus nullifying the need to actually explode a helicopter which needs to be returned to its owner.

To try and maintain the illusion of a genuine chopper fireball, they drop the fuselages of a couple of helicopters from just out of shot onto the street – with one landing on top of a car - cueing further explosions. 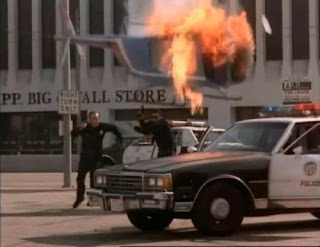 They may well have got away with such a sleight of hand if the helicopters we see buzzing about in the sky looked anything like those dropped on the car. But that would be an ambitious hope. In car terms, you essentially see a Volvo get blown up and then a Mini hitting the ground.

Sadly, none to report. One can only hope that Merhi will one day set out to make ‘the greatest exploding helicopter movie ever made’.

When the second helicopter crashes down a policeman needlessly slides across the bonnet of his patrol car to avoid flying debris. It’s totally unnecessary, a very minor detail, but a nice touch nevertheless.

As mentioned before, Executive Target makes two grand claims about itself, but only delivers on one.

I won’t quibble with its assertion that it’s the greatest crash movie of all time. Multiple car pile-ups abound, and no red-blooded film fan is going to complain about watching yet another car smash through the side of a lorry – they’re only this flimsy in films.

However, the actual car chases lack the kinetic excitement of, say, The French Connection or Mad Max. Those sequences conveyed danger and speed, whereas here the chase scenes aren’t much above what you might see in an episode of Starsky and Hutch.

"When I say cherry coke you shoot."

Michael Madsen has now racked up an impressive 200 screen credits, in a career which can at best be described as, erm, uneven. However, seeing as he’s listed as a producer on this one, he’s only got himself to blame.

Review by: Jafo
Posted by Exploding Helicopter at 09:26